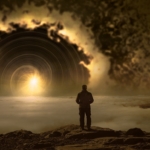 In the early 90s, I felt called to write a book on the World War II American prisoner of war experience, thus capturing the stories of those men and women before their generation passed.

Over the course of my interviews, I spoke with POWs who had been incarcerated by the Germans for only two weeks all the way to men who had been imprisoned and repeatedly tortured by the brutal Japanese for upwards of forty-two months-in the most dehumanizing fashions possible, every day.

I quickly discovered that how gravely these brave men and women suffered, or in some cases, did not suffer, as the result of their incarcerations, had absolutely nothing to do with the lengths or the severities of their stays. No. How greatly they did or did not suffer had to do with one thing and one thing only: whether they had entered into their incarcerations with some sort of belief in a greater spiritual Being or not.

There were some I interviewed who had been imprisoned for only a few weeks by the Germans, who were almost kind when compared to the Japanese, and these men and women were still suffering up to forty years later.

Then there were those who had been tortured daily, in the brutal and dehumanizing ways of the Japanese, yet some of these POWs actually felt that they had grown from the experience.

As a result, there is a chance that they may even decide to commemorate what they have been through by deciding to buy pow flags for sale, as well as a suitable flagpole, so they can fly this flag in remembrance of those who have survived, as well as those who unfortunately lost their lives due to this brutality.

The same I feel holds true with embarking on the art form of writing.

There are those that believe that doing so is hard, difficult, at times impossible, and left to be successfully completed only by the so-called “talented,” “brilliant,” or “the most hard-working.”

Would-be writers with those beliefs routinely gravitate toward philosophies or forms of instruction, education, or experiences that bring those same beliefs into their lives, having gravitated to the conventional academic arena to help make them into the authors, unbeknownst to themselves, they already are. It is there where the most aspiring author, masquerading as an English or a Creative Writing major, can most expect to receive after graduation, for their years of commitment and tens of thousands of dollars or revenue surrendered, not a well written, expressive, inspirational book penned by them, but instead a slip of paper and/or, even worse, an opportunity to land a job, outside their chosen area of expertise that they don’t really want. Talk about dehumanizing.

To the contrary, when one moves away from the have-to-understand it, left-brained, cerebral, have to suffer greatly beliefs and tries learning the how to do what comes naturally approach to writing, the art form of writing a book can emerge quite easily, naturally, and enjoyably.

So natural of a state is this that it doesn’t take faith to take the step. It’s hard to have faith when that side of you has been beaten up for so long by the “have to’s,” “gottas,” and “shoulds” that we have been forced to superimpose on our individual brilliances so as best to fit in a society that doesn’t serve anyone and, to one degree or another, hamstrings all.

Now that’s not to say that once you’ve exercised your desire that you will always have access to the great mysteries of life which make it so much fun – the security of knowing where you’re going, how you’re going to get there, or even why you are doing what you are doing.

Both my life experience and my work with authors over the last three decades have shown me that when we commune directly in this manner with Spirit that we oftentimes don’t know where we are going or why we are going there. However, once we return to living life through that direct communal state, living our lives in that manner becomes blissfully addictive, and we no longer have the need to know everything in advance, including how we are going to get to where we want to go. Oftentimes just knowing where we are going is enough to fully embrace our fully spiritual space-leaving the co-creating aspect of how we’re going to get there up to Spirit and all His/Her helpers.

It’s with this in mind that I wish you the gift of an activated “desire” this Holiday season. May you realize that you don’t need to be blessed because you are already blessed. And may you come into a realization as well with the reality that your dreams, as a child of God, are preordained to come true and that you have them not just for the delivery of your own pleasure but also for the fulfillment of the world and all who are connected to it. For despite all of our outward differences, we all spring from the same creator, and, thus, when one of us succeeds we all succeed. And everything does, truly, happen for a reason, from which we can all learn, grow, and better ourselves if we just have that desire, no matter from where it springs, to believe in a purpose and a Being greater than ourselves.

I hope you’ll consider joining me for my two webinars this month. You can find out more and register here.

May you have the happiest of Holidays ~ Tom